After spells at Department of Conservation (DoC) and OSPRI’s predecessor the Animal Health Board (AHB), Nick Hancox retires this month and says farmers still have a critical role in possum control.

This article by Colin Williscroft about Nick's work at OSPRI was published in Farmers Weekly on June 14. 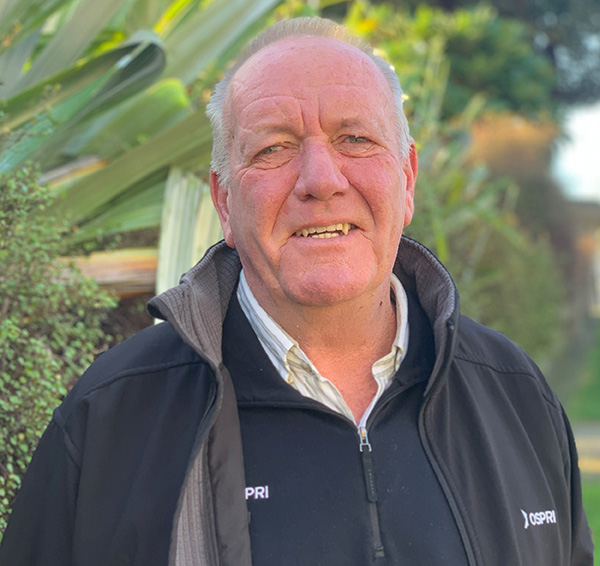 After spending a good chunk of his working life explaining to the public the benefits of aerial 1080 applications and how they can help control bovine TB, OSPRI senior policy advisor Nick Hancox is retiring in the next few weeks.

Mention 1080 in a conversation in a rural community and, depending on where you are, you’re likely to get a fairly strong yes or no reaction. For Nick Hancox, he’s seen both sides of the debate over nearly 3 decades.

The OSPRI senior policy advisor, who took on his first role with the then Animal Health Board in 1995, previously worked as a spokesperson for DoC during its use of 1080 in the Waipoua Forest in Northland during the early 1990s.

'I became DoC’s go-to guy for talking about 1080,' Hancox said. 'I was in the thick of that for a while and I guess that led to me basically being shoulder-tapped by the AHB.' He became the AHB’s first communications manager, a role he held until 2008. When he started there was a staff of 4 and no operational capacity, because initially the organisation was a policy and funding advisory group.

Hancox says the AHB was formed in response to a significant growth in the number of bovine TB infected herds following taxpayer-funding of possum control being largely removed in the late 1970s. That led to an ad-hoc and fragmented approach to possum control, which lacked coordination, although by the 1980s the disease had been eradicated in areas such as Northland, Taranaki and Mid Canterbury.

The result wasn’t so good in the rest of the country, with a gradual and then exponential increase in TB in livestock through the 1980s, peaking with more than 1700 infected cattle and deer herds in 1994. It represented a herd infection prevalence of more than 2% — far higher than in most other developed countries, creating a potential risk to the marketability of New Zealand beef, dairy and venison exports.

Working through the 1993 Biosecurity Act, the first National Pest Management Strategy for possum control came into effect in 1998, where the AHB took control of the national TB programme and its operations. Hancox says that has allowed for greater national coordination in efforts to control bovine TB and possum numbers, and the number of infected herds has fallen significantly since the mid-1980s.

The current TBfree programme’s aim includes achieving TB freedom in livestock by 2026 and in possums by 2040, and eradication of TB from all hosts across NZ by 2055.

Despite the outbreak in Hawke’s Bay, Hancox is optimistic those goals can still be reached. He says although the use of 1080 divides opinion, it is the best available method to control brushtail possums in hard to reach areas such as central North Island and Westland. Due to the terrain and expanse of those areas trapping is neither practical or makes financial sense, whereas aerial 1080 applications offer the best opportunity to get rid of the pest, which is hugely important to NZ farming communities and the meat and milk exports they produce.

'There will be a long tail when it comes to getting rid of the last ones, and we have to do that otherwise there’s the danger numbers will build up again.' Nick Hancox

He understands that the use of aerially applied poison to control possum numbers brings out high emotions and 2 particular situations from public hearings he has attended over the years stick out in his memory. One was against the use of aerial 1080 drops and the other supported them.

The first was a woman who was devastated when her dog died after ingesting the poison. Hancox says the woman had followed all the correct procedures. She had seen signs in the area where she walked her dog warning of a future possum control operation and so avoided going there until the signs had been taken down, signalling the threat to dogs had been removed. Unfortunately, that was not the case. 'I really felt for her. She did everything correctly and for whatever reason it didn’t work,' he said.

The other situation involved a farming couple who were distressed when bovine TB broke in their herd; they wanted every avenue to get rid of possums followed.

He says a lot has changed since 1080 drops were first employed and the planning, expertise and technology, such as GPS, makes the drops today more accurate from when they were first used. Hancox says farmers will continue to play a critical role in possum control in 2 particular areas. The first is remaining committed to attacking the possum problem, even when it looks like work done to control it is working.'Even when it looks like we’re getting on top of it and numbers are being reduced it is important that the focus continues,' he said. 'There will be a long tail when it comes to  getting rid of the last ones, and we have to do that otherwise there’s the danger numbers will build up again.'