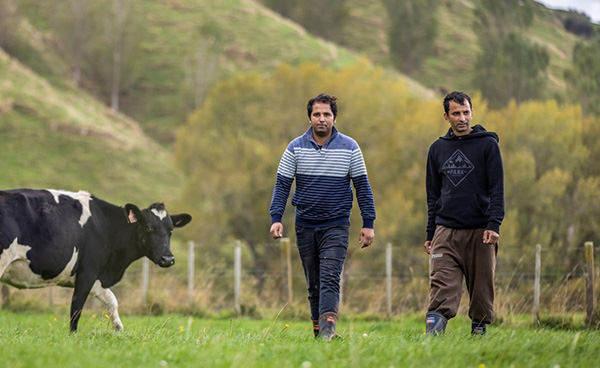 From early July, it will be all hands-on deck for awarding-winning dairy farmers Manoj Kumar and brother Sumit Kamboj as they start welcoming their first winter calves of the season.

They expect around 760 calves on both Eketahuna properties which they manage along with their 6-strong team.
Front of mind for both brothers is making sure all new-born animals are traceable and their details recorded in the NAIT system.

'We use LIC’s dairy participant code tags as we know these tags numbers are aligned to NAIT and can be matched in the NAIT system. Once we’ve tagged the animals, the tag numbers are recorded in MINDA [livestock management system] and that synchs through to the NAIT account for registration.'

The brothers keep tabs on the NAIT accounts for the 3 NAIT locations they manage. When they first took over the sharemilking duties, they discovered that the NAIT records needed updating.

'Some of the herd were not registered in NAIT and the movement records were also requiring attention. We called the OSPRI Contact Centre, and they were brilliant and very helpful getting the NAIT accounts to reconcile so we could become NAIT compliant.'

On-farm biosecurity starts with making sure new-born calves are tagged and registered in NAIT within 180 days of birth (6 months) or before their first movement off-farm, whichever happens first.

Mr Kumar believes NAIT is not difficult to keep on top of and says it is essential for supporting disease management.
'I believe we are all learning from the M. Bovis outbreak and how traceability has played a part in managing and containing it. There is also more information available about keeping your animals compliant with NAIT.'

This season the plan is to hold on to most calves and to manage them at a recently acquired run-off block near both farms. Mr Kumar said they wanted to build equity with their livestock and breed replacement heifers.
'We’ll keep most of our bull and heifer calves and may sell some when they reach 100 kilos or just before finishing.'

When moving animals on and off-farm, both brothers choose to scan the animal tags using a Tru Test scanner. This saves time and is particularly efficient for transporting animals off-farm. 'When we send our animals to AFFCO [meat processor] they can make the NAIT movement on our behalf as they are an NAIT accredited entry — so we just have to provide an Animal Status Declaration (ASD) form along with the animals being moved.'