How does TB spread?

Cattle and deer are naturally curious and will sniff possums which stray into fenced farmland. Scavengers such as possums, ferrets, stoats or pigs feeding on an infected carcass or offal may contract TB. A grossly infected animal may have externally exposed weeping lesions which can be infectious. In wild pigs TB is found 95% of the time in lymph nodes just below the jaw. This is why dumping pig heads where scavenging animals may have access is a major issue for OSPRI’s TBfree programme. 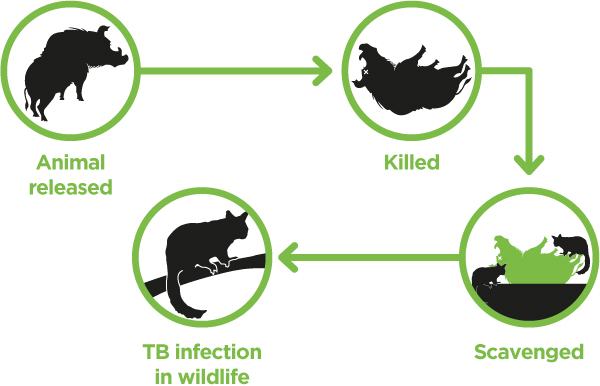 Notify OSPRI if you suspect you have found TB in wild deer or pigs.

The infection will usually be in the form of pus-filled abscesses or lesions that look like whitish lumps.

If heads or unwanted body parts are dumped, they can be scavenged by ferrets or possums. This can establish or re-establish infection in ferrets and possum populations and can lead to disease being passed on to nearby cattle and deer herds.

Find out if the area you want to hunt in is a Vector Risk Area (VRA) where TB infection is present. If you're hunting in a TB-infected area, assume all wild animals are infected — even if no TB lesions are visible. Remove the head or any unwanted parts and leave these behind where the animal was killed. The head and upper neck is the most likely site of any infection. The rest of the carcass will then be safer to transport. If taking the head or whole carcass out, dispose of it properly, either at an official offal facility or by negotiating to use a farmer’s offal pit.

See where the vector risk areas are

Do not transport or release wild animals to new areas

Hunters may spread TB by taking pigs or deer from TB risk areas and releasing them in TB-free areas. This is an illegal practice. It could also undermine regional TB control efforts. To help reduce this risk, please do not move live wild animals.

While the risk is small, hunters could get TB when cutting up infected wild pigs or deer.

To reduce the risk:

Dogs can also become infected with TB. Feeding raw pig heads and other offal to your dogs is not recommended.