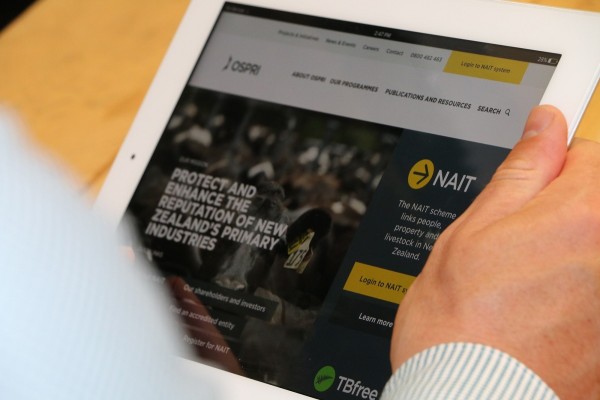 The recent independent review into the M. bovis outbreak in 2017 confirmed what we largely already knew - that the NAIT system was not fit for purpose, with poor and incomplete NAIT records significantly increasing the time and resources required to trace and eliminate the disease from infected stock.

Three years on, we’re making steady progress and OSPRI is pleased to see a record number of farmers adopting good on-farm traceability and biosecurity practices, including increased compliance with NAIT.

In fact, we recently recorded a milestone, with over 91 percent of NAIT animals now registered in NAIT before their first off-farm movement - a significant improvement from just 52 percent of animals in 2018.

This is a direct result of the work we’ve been doing to stabilise the traceability scheme – to make it easier for farmers to understand and meet their NAIT obligations and to ensure the system performs in the event of a future outbreak.

In that time, we’ve embarked on technology investment to deliver a farmer focused, fit-for-purpose information system that will be easy to use, and with better interoperability so farmers only need to input data once. We’ve also implemented a new organisational structure and operating model that makes it quicker and easier for farmers to get the support they need, whenever and however they want it. And we’re introducing new standards and an audit and accreditation framework to improve the quality of service and data entered into the system.

This progress would not have been possible without the support and hard work of all of those involved in the scheme. We want to especially thank all the farmers and lifestyle block owners who’ve got us to this point and done the right thing by their neighbours, community, and industry.

Still, there is work to do to get everyone on board, consistently adopting good on-farm biosecurity and traceability practices and meeting their NAIT obligations.

Recent NAIT data has revealed that there are still approximately 15,000 to 17,000 unregistered NAIT animals moving each fortnight. This is not acceptable and creates a significant risk of disease spread. We are still fighting M.bovis, and, as we saw in the Hawke’s Bay, the threat of a TB outbreak is ever present.

It’s critical for disease management that farmers stay on top of their NAIT accounts. As we know with Covid 19, contact tracing and movement recording are essential to help contain and minimise the impact of a disease outbreak.

Now is not the time to become complacent. If M.bovis has taught us anything, we must always be on guard for the next disease incursion.