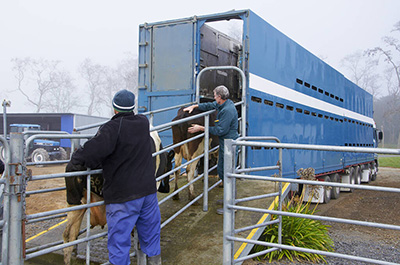 This will help us and the industry collect better information about tag retention and tagging practices. It also provides clear accountability for people who are moving untagged animals that are not exempt from tagging, which is an offence under the NAIT Act.

We will be monitoring the numbers of animals that are moved untagged without an 'unsafe to tag' exemption as reported to NAIT by meat processors. We will follow up with farmers if necessary.

These are the existing levy rates since March 2014.

Meat processors may also charge additional fees for both 'unsafe to tag' exempt and other untagged animals. These fees are associated with the risks of handling unsafe animals and/or the loss of revenue due to untagged animals being ineligible for some export markets — for example, the European Union.

To reduce the risk of an animal losing its tag in transport, you should make sure their animals are tagged properly following tagging guidelines, and long before sending them to reduce irritation and rubbing.

If you notice a high number of their tagged animals arriving at the meat processor untagged, we recommend scanning them as they leave the farm and proving that information to us to update NAIT records.

Sending 'unsafe to tag' animals to a meat processor? Remember to declare the animal in NAIT and mark it before it leaves.

Untagged animals that are large and/or aggressive and present a risk to you or your teams may be considered ‘unsafe to tag’ for NAIT purposes. You can get an exemption from tagging these animals.

How to get an exemption for an unsafe to tag animal

You must meet the following conditions to get an exemption from tagging.

You must also note 'unsafe to tag' animals when filling out a declaration to your livestock transporter. We also recommend mentioning this in the notes section on your Animal Status Declaration.

This requirement also applies to stock companies sending 'unsafe to tag' animals direct to slaughter from a saleyard location.