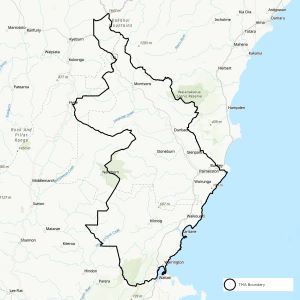 The East Otago TMA covers 147,000 hectares, extending from Waitati to Palmerston, and then inland towards Central Otago.

It is mostly coastal habitat but is wetter and has more vegetative cover than the dry country further inland. There are substantial areas of native and exotic forestry, broken rough scrubland and improved farmland.

History of TB and pest control in East Otago TMA

We carried out ground control of possums in:

We completed aerial control in:

There are no infected herds in the East Otago TMA.

The East Otago TMA is in the Coastal/Central Otago Movement Control Area. Before you move cattle or deer to another herd or farm, you must have them tested for bovine TB.

Dates and control methods for pest control operations in East Otago are provisional and subject to change. If you’re affected by any upcoming operations, our pest control contractors will contact you before work begins. They will:

The proposed area for ground control is marked on the map in green.

Contract Wild Animal Control NZ LTD manages eradication activities in the East Otago TMA. Contact them directly if you have feedback or questions about upcoming operations.