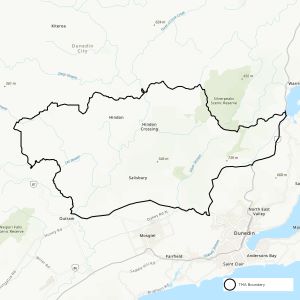 The Mount Hyde TMA covers 32,200 ha to the north-west of Dunedin. The TMA spans both sides of the Taieri River, and also incorporates the Lee Stream and Silver Stream Catchments.

The topography ranges from steep sub-alpine area, with steep gullies and faces, down onto the Taieri Plains. The habitat includes tussock, small stands and gullies of native bush and developed farmland.

History of TB and pest control in the Mount Hyde TMA

The last infected herd in the Mount Hyde TMA was detected in 2004, although there are records of infected herds dating back to 1988.

The last detected wildlife infection, in a ferret, was in 2012.

We completed ground-based possum control in:

We carried out aerial control in:

There are currently no infected herds in the Mount Hyde TMA.

The Mount Hyde TMA is in the Coastal/Central Otago Movement Control Area (MCA). Before you move cattle or deer to another herd or farm, you must have them tested for bovine TB.

Dates and control methods for pest control operations in the Mount Hyde TMA are provisional and subject to change. If you’re affected by any upcoming operations, our pest control contractors will contact you before work begins. They will:

The proposed boundaries for aerial operations will be refined after consultation with landowners and affected parties.

Contract Wild Animal Control NZ LTD manage eradication activities in the Mount Hyde TMA. Contact them directly if you have feedback or questions about upcoming operations.